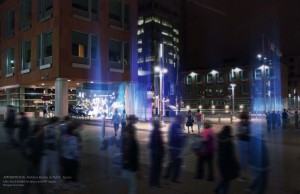 NIGHT\SHIFT attractions are spread throughout various indoor and outdoor locations in downtown Kitchener, based around a central event hub on Duke Street (closed between Frederick and Queen), and spreading out in both directions along Queen both North and South (as well as into the two downtown laneways – Halls and Goudies).
NIGHT\SHIFT is a project of locally-produced environmental magazine with Alternatives Journal and involvement from local artists, businesses and other community builders.

In addition to publishing a national magazine, A\J is a registered charity engaged in environmental education and community-building activities. Envisioning a better future is a central goal at A\J, and exploring or reimagining the built spaces around us is integral to achieving that goal.

I spoke to NIGHT/SHIFT’s Artistic Director Eric Rumble who discussed the difference between this year’s and last year’s event. This year NIGHT/SHIFT is offering 40 different events and Eric also spoke about the highlights. Don’t miss this one of a kind nocturnal adventure! 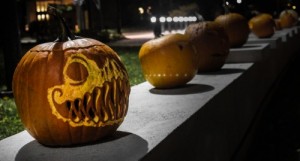 For more info, maps, lineups, and places to Sup and Sip – go to www.nightshiftwr.ca. Check NS out on twitter and Facebook as well.

Here is my chat with Eric Rumble from Night/Shift. See ya on the Night/Shift!  – Coral FM.

The Clean Up Hour