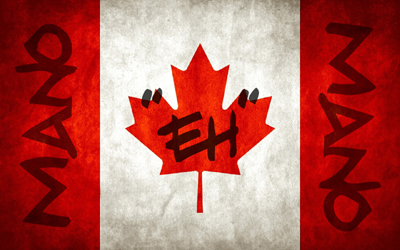 Most people didn’t know this but, it wasn’t just Canada Day yesterday – It was also Netflix Day! We celebrated both early on Mano A Mano so that we could spend the day at The University of Waterloo’s Canada Day Celebration!

was recorded at the underground Mano A Mano headquarters, which is why it sounds slightly different from our usual podcasts. This was done so that we could spend the entire day, into the night, at the UW Canada Day Celebration.

There was lots to do this year. We were especially excited to go because the musical groups were acts that we have featured on the show and/or are featured in The Electrifying Adventures of DJ Jeff E Jeff. To Start the day off we took the kiddies to the bouncy castles. They were great fun! We got there at 3:30 and there were no line ups. Tickets were a bit expensive: $2 for one “ride”. The “rides” lasted, at the very most, 30 seconds too. Toward the end of the day, these line-ups took about 20-30 minutes before getting your 30 seconds of fun. Even though this aspect of the Canada Day celebration was expensive there we a lot of free things and give-aways at Columbia Lake – one really cool thing that was put on was Canada Day Turbans.

People could go and get a free Turban in Canada Day colours!

To Start things off on the Main Stage, “The Water Boys”, The University of Waterloo’s expert singing group took the stage. (The University of Waterloo is not known for their music program)  They beat-boxed us through a compelling version of the fitting Green Day Song – 21 Guns, something else, and then an alternative version of “Oh Canada”. This set the stage for the TVO Kids content that was to follow.

My daughter was soooo excited to see “Princess P” From TVO Kids. Apparently she was the stage announcer.  All she really did was read from a clip-board and introduce the acts but for some reason my daughter just loved it and I could not figure out why.

Splash and Boots (as seen in the photo) were great! They had all the kids engaged and were dancing and singing along.  They took a little break for an Aboriginal Hoop dancing and Drum circle which was amazing! I was in such awe that I forgot to pull out my camera. I would have to say that, for me, this was the best show of the entire TVO Kids set. When they finished, Splash and Boots returned and got right back to where they left on – captivating the kids. Next they played a few commercials, where an Canadian Olympian, Heather Moyse, told us about how she was an Olympic medalist “but more importantly, (she was) a University of Waterloo Grad”. I believe she was implying that ALL UW Grads are more important than Olympic Medalists.

Next up the “Silly People” started showing off their stuff. I think that people were starting to get hot, thirsty and hungry because their stuff was cool but the Silly People kept telling the crowd “Its ok to clap” and “We must have shocked you all into silence”. Anyways, the constant patronizing got to be too much, so we left and tried some of the food trucks. I had heard of SWAT so I got a Sandwich With An Twist and it was great! We played some tag, got some freebies and then the HUGE monitors told us that the Mano A Mano past feature band Born Ruffians were going on! In True UW Federation of the Students fashion (the people who fought to stop funding to CKMS and tried to shut us down) the President of the UW Feds took the stage and introduced the Born Ruffians saying “I’m excited to hear what they sound like”. Obviously she booked them because of their stylish good looks. Born Ruffians sounded great, I hope that the president of the UW Feds was happy with what she was able to book. The only criticism I have of their set is that they dropped a few F-bombs with lots of children still around. But in their defense – why are kids allowed to be awake after 7pm, even on Canada Day?

The almost main event was Steven Page ex-Barenaked Lady. His set went back and forth between new stuff and Barenaked ladies classics. His new stuff was quite good! At one point after one of his originals, I thought “they should finish there, that was darn good”. But I was wrong. After that they performed Brian Wilson which elevated it even higher. The night was topped with a great firework display.

Overall I thought that it was a great Canada Day! I cannot fully compare to previous years because this is the first year that my kids have been old enough to stay at the park from 3:30 until 11:00. They had a great time – so I rate this Canada Day an overall success!

Thanks @RadioWaterloo, there’s a lot of amazing talent on that tape, from Barrie, Toronto, Ottawa, and the US!