Andrew is the only Canadian actor in this production!

ANDREW DI ROSA  is thrilled to join the company of Evil Dead – The Musical!  Andrew hails from Toronto, Ontario, where he graduated from the University of Toronto and Sheridan College Specialized Bachelor of Arts Joint Program. Andrew’s past performances include Danny Zuko in Grease, Gaston in Beauty and the Beast, Laurie in Little Women, the Scarecrow in Wizard of Oz and most recently the title role in Shrek: The Musical.  He also stars in the feature film “Fragile Minds” which is slated for release next summer.

Created by George Reinblatt, Frank Cipolla, Melissa Morris and Bond, Evil Dead – The Musical is a home-grown success story. The original production, based on Sam Raimi‘s Evil Dead film franchise, opened at Toronto’s Tranzac Club in 2003 and has been covering audiences in blood ever since. Playing to sold out audiences around the world, Evil Dead – The Musical is a proven critic and fan favourite. Starvox introduced Evil Dead – The Musical to Philadelphia in 2013 before heading back to Toronto for a limited run that was repeatedly extended after sold-out success. The current North American tour includes stops in Toronto and Hamilton, with stateside stops in Ohio, Indiana, Illinois, Tennessee, New York, Connecticut, North Carolina, Florida, New Jersey, Pennsylvania, and Arizona.
Not to be missed is the infamous “Splatter Zone”. Better than a 3D movie, audience members sitting in this designated area (the first 4 rows of the centre orchestra) get doused in fake blood, incorporating fun real-life effects for the ultimate Evil Dead experience. In addition to bloody seats, the show’s bloody jokes and bloody tunes (“All the Men in My Life Keep Getting Killed by Candarian Demons”, “What the F@#k Was That”) keep audiences laughing out loud, and screaming for more.  The North American tour, produced by Starvox in association with original producer Jeffrey Latimer Entertainment, features a brand new touring cast: Julie Baird, Demi Zaino, Callie Johnson, David Sajewich, Creg Sclavi, Ryan McBride, Andrew Di Rosa, and Ryan Czerwonko.

Evil Dead The Musical is playing at The Randolph Theatre ( formerly Bathhurst Theatre) to Nov 9!

Andrew and I chat about Evil Dead The Musical and his fave horror flicks! OOOH Scary! – Coral FM. 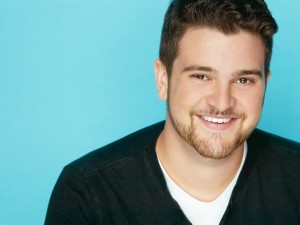