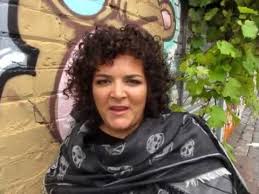 Sandra Bender is the CEO of Centre in the Square. I was chuffed to have her as a guest in the Sound FM studios. And we had a very wide ranging chat from recent sell out spectacular The Book of Mormon and the upcoming challenges and contraversy of presenting comedian Bill Cosby, to Sandra’s Centre Stage wish-list and the Centre audience of the future.

Sandra spoke about new programming initiatives for 2015, the Centre’s venerable children’s series, and its continuing On Stage Series which features three fine acts for the 2015 season. WE also featured music from Sandra’s personal play-list.

And kudos to Sandra for bringing “The Book of Mormon” to Centre in the Square because ….. this happened!

Out of 15,000 tickets !!! 14,437 people flocked to Centre In The Square to see the National Tour of The Book of Mormon which ran for eight performances December 9 to 14, 2014. Most performances were sold-out, with overall attendance for the one-week engagement at 97 percent. The show represents the highest attendance and financial impact from a week-long production at The Centre in over 10 years. In addition, more than 38% percent of the audience were first-time visitors to The Centre.

“We’re very pleased that The Book of Mormon was so enthusiastically received by the KW community and it was particularly exhilarating to welcome so many new visitors to The Centre,” said CEO Sandra Bender. “In the strategic plan we set some ambitious goals with respect to programming work that would raise the reputation of The Centre and attract a new audience. This record-breaking run of The Book of Mormon is a major step forward on our journey towards becoming an organization the public can rely on to present important and outstanding work of our time.”

About Centre In The Square

For more than 30 years, Centre In The Square has played a leading role in promoting the highest quality of local and international music and performing arts in southwestern Ontario. Located in Kitchener, Ontario, The Centre is dedicated to promoting performing arts that entertain, inspire, engage and create memorable experiences for the region. The venue’s main hall, a 2,047-seat state-of-the-art theatre boasts superior acoustics and is widely regarded as one the finest performance spaces in North America. Last year, The Centre welcomed nearly 200,000 visitors to a range of events including dance, comedy, musicals, theatre and music from classical to rock. A registered not-for-profit charitable organization, The Centre is governed by a 14-member board with a staff of 200 full-time and part-time employees.

I have been seeing, profiling and reviewing shows at Centre in the Square since 1980. This is the third Centre CEO I have had as a guest, as I also had former Centre managers Dan Donaldson, and Jamie Grant on the radio show as well. Years back, I made Jamie Grant promise that he would one day  bring The Book of Mormon to the Centre, because I .. ahem… Believed (being such a huge South Park fan) that this show would take Broadway by storm. The rest is Broadway history, and now Centre in the Square history. It was Sandra Bender that made Mormon happen! Swwweeeeeet! –  Coral FM.

Listen here for my special in depth chat with Sandra Bender!