Carlie Roberts is a curvy movement maker, leading women to a stylish place of self love and fashion confidence one consignment at a time. She founded Consign Your Curves , Canada’s largest size inclusive consignment sale in 2013. After nearly adding to the closets of over 2000 women, Carlie then turned her treading hashtag into a headquarters when in 2018 she opened Consign Your Curves in Guelph, ON

A musician, songwriter, artist and music teacher. She has been the owner and founder of Russell Music Teaching Studios in Waterloo for the last 8 years and has been teaching for 18 years. A powerhouse vocalist and an adept multi-instrumentalist, who uses her classical training to create fiery, eclectic, soulful jazzy-electronica as well as acoustic songs, Charlena Russell

The fascinating story of clock-maker Andrew Bass. A retired mechanical engineer who previously owned his own company that he sold in 2012 started “Tempus” @tempus.making.time a business unlike anything he’s operated before. Bass, not sure yet if he’s making art or manufacturing a product, or a combination of both has made a total of seven clocks from external grade MDF and Baltic birch plywood for all of the mechanism parts, relying on his mathematics and mechanical engineering background. In an era of decreased life-cycles and product quality, Bass has become deeply invested in the revival of craft , handmade art and the making of time itself. To know more check out his website www.makingtime.ca

An artist, a musician and a passionate performer Juneyt Yetkiner @juneytyetkiner , from Istanbul, Turkey, Juneyt is a self-taught musician playing Nuevo-Flamenco guitar for 17 years. Juneyt has performed on many albums and at numerous festivals representing Canada. He has also played alongside & opened for well-known musicians throughout his career such as Alex Cuba, John Mcdermott, Liona Boyd, Doobie Brothers and Santana. Juneyt has composed music for two television documentaries, won the Records Readers Choice Awards 11 times 2011-2019, Toronto Independent Music Awards in 2017 & and Waterloo Arts Awards In 2019 to name a few and has been nominated for many awards both Nationally & Internationally. He has built an impressive career as a professional musician playing both locally and internationally. You find find schedules and information on Juneyt at www.juneyt.com

Erin Michalski @erinmichalski.photographic.art and Erin Watt @erinwattphotography, photographers from Waterloo region shared their journey and experience with Christmas Wish Project bringing joy and happiness to sick children and their families. They brought the Christmas Magic into the lives of these families trough magical Santa photos.

Kat VanLammeren facilitates drumming workshops for hundreds of people of all ages. She found the Organic Groove (Canada!) Summer Drum Jam in 2002 and has travelled to many tiny Inuit villages in the Canadian Arctic to perform and teach kids how to drum. Kat collaborates and performs with poets, spoken word #artists , singer songwriters , electronic music, DJs and other musicians while taking workshops and lessons in West African drumming Middle Eastern drumming, Afro Cuban percussion, and Australian Didgeridoo.

Gerima Harvey is a dynamic soloist and a member of many musical relationships. He lives in a world where love reigns and where he hopes there is always an abundance of music lovers to collaborate with. He hears the beat of yonder drummers and possesses a unique gift of being able to gel with any art form and artist. He launched his first CD in June 2015. From studio to stage, this magical musical genius inspires everyone, everywhere he goes 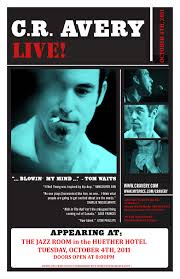 It’s Sex, Drugs and Spoken Word! Poetic Slam Dunkin, Blues Harpin, Hip Hoppin, Beat Boxin, Street Talkin Prose and Cons Troubadour For more info go to www.cravery.com
This is an on site chat I did with CR the first time he played The Jazz Room!