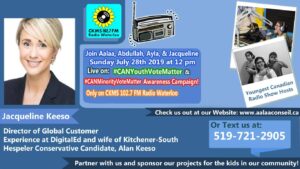 When you meet Jacqueline Keeso, the saying “behind every successful man there is a strong woman” starts to make sense. Every political candidate’s success depends on their team and the people who support them, but one person who plays the most important role is their spouse or partner. Even though the candidate’s spouse or partner usually remain behind the scenes, but without their support not only before, during the elections or even after it, matters a lot.

Well with my Awareness Campaign & Radio Show, Youth and Minority can learn firsthand what steps are involved in the election process. How they can run or become part of a political campaign or a cause that they believe in. Youth and Minority will also know what motivates their political candidates and activists to do what they are doing, and what sacrifices they have to make to do what they are doing.

Youth & Minority you also need to understand that not everyone will win but in the end we all are humans aren’t we? And we have families. We all have feelings, inspirations and a belief in our cause. Especially at this time we all will need support or support groups.

Catch the Youngest Canadian Radio Show Hosts and their guest Jacqueline Keeso, Director of Global Customer Experience at DigitalEd and wife of Alan Keeso Conservative MP Candidate in Kitchener-South Hespeler on CKMS 102.7 FM Radio Waterloo. On Sunday July 28th, 2019 at 12 noon. It will be live streamed on Facebook too.

Shout out to my classmate Katherine Lam for making Jacqueline’s Radio Show Poster.