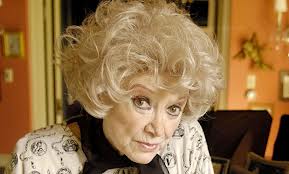 Phyllis Diller. Yes I interviewed her one day while I was on lunch at Maple Leaf Foods.

Phyllis Diller was the first of her kind opening the doors to many a female comic from Roseanne Barr, Ellen, and Whoopi, to Judy Greer and Kathy Griffin. But unlike her garish stage comic personna, Diller was also the quintessential creator – a visual artist and concert pianist and gourmet cook with a killer recipe for chicken chili. But no one will never forget The Big As Life GUFFAW…
In 1999, I was lucky enough to chat with Diller by phone in advance of her show at Centre in the Square just before the tragic event at Langdon Hall when she lost her chauffuer and good friend Patricia Marcella . When I met her briefly backstage after her Centre show, Diller was very sweet and remembered me because of my name. Later that year she had a heart attack, and in 2002, she retired from the road for good to pursue more of visual artwork in mixed media acrylics.
Phyllis Diller was an original – one of the classiest women I have ever met. She loved jazz and the great jazz pianist Bill Evans so the music of Evans is also interspersed in this chat. I aired part of the interview but to honour her wishes – did not air anything she said Off The Record and there was plenty. Hence this radio excerpt. This is still one of my all time favorite chats in my vast archive of interviews. Goodbye Phyllis. So long and thanks for The Guffaws.. – Coral FM.