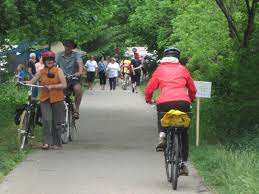 The Iron Horse Trail, which connects UW with downtown Kitchener, will be the site of much conviviality with the Animate the Trailfestival Sunday, May 27 1-5 p.m. At either end of the Iron Horse Trail are two large, beautiful parks. Waterloo Park, located in between the city’s two universities, just south of University Ave. features sports field, picnic tables, a splash park, a duck pond, and a small zoo with llamas and peacocks and stuff. See that antique train? Yep, that’s where you catch it to go to the market. See that futuristic black building? Yes, that’s the Perimeter Institute. Sometimes, Stephen Hawking hangs out there. Cool, huh? Kitchener’s corresponding park is Victoria Park, a lovely expanse of gardens, water and bridges, with a really, really good playground (just in case you have a small philosopher with you). It’s yer classic Commonwealth park, complete with statue of Queen Victoria and cannons to play on.