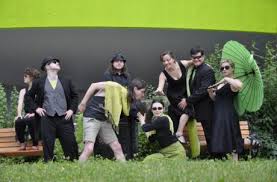 Asphalt Jungle Shorts is defined as The Intersection of Theatre and Reality. AND beginning tonight!! actors will lead the unsuspecting audience on an intriguing sojourn through the streets of downtown Kitchener – both physically and literally.
Flush Ink Productions Artistic Director Paddy Gillard Bentley speaks about Asphalt Jungle Shorts VIII, and its evolution. This includes the recent inaugural staging of AJS in Waterloo as the troupe performed through the nooks and cool little crannies, restos and pubs of the Uptown core. Paddy also spoke about Flush Ink’s Urban Theatre Festival Unhinged and intoxicating new novel The Unexploded Boer written by Erich Rautenbach.
For more info on AJS VIII and other Flush Ink shows including Unhinged, and She Speaks, go to Flush Ink.  And because Flush Ink is “Theatre That Thinks Outside the Theater” I think it’s rather apropos that this chat was recorded live in the studio from my Edirol recorder’s digital mic, hence the edgier sound quality. So pump up the volume! – Cheers Coral FM