At midnight on Friday, November 16, these brave playwrights were taken to disturbing locations to write a disturbing 10-minute play in 24 hours. Isolated. Haunted. Creepy. Uneasy. Frightening. Paddy wants me to do this …. Gulp. Maybe someday…. 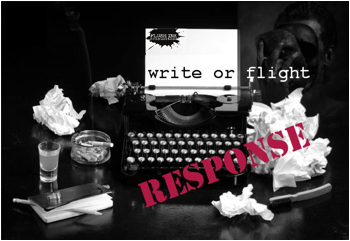 KATHARINE MILLS is an actor, designer, writer and visual artist. She has appeared in multiple roles in KW’s annual site-specific urban theatre production, Asphalt Jungle Shorts. She is a partner in local experimental theatre company What!sInThere?! Productions; she performed in their productions of Copy Protection and Children’s Crusade, and acted as facilitator and stage manager for their recent Fringe production of Psy Co.’s Cross. Other recent appearances include JM Drama’s Tales of the Grimm, and Galt Little Theatre’s Queen Milli of Galt and, A Clean Breast, in UnHinged 12.

PADDY GILLARD-BENTLEY- playwright,director, producer & poet has had over 60 of her plays produced in USA, Canada, England & Ireland. Two of her plays are published. PGB is the founder and Artistic Director of Flush Ink Productions, past President of The International Centre for Women Playwrights and the Chair of The Coalition of Performing Artists (COPA).Paddy has also worked with MT Space, KW Youth Theatre & The Studio Players. PGB has been involved in theatre one way or another since her mother performed in Time Out for Ginger when four months pregnant with Paddy.

For more (if you dare) – http://www.flushink.net/index.html