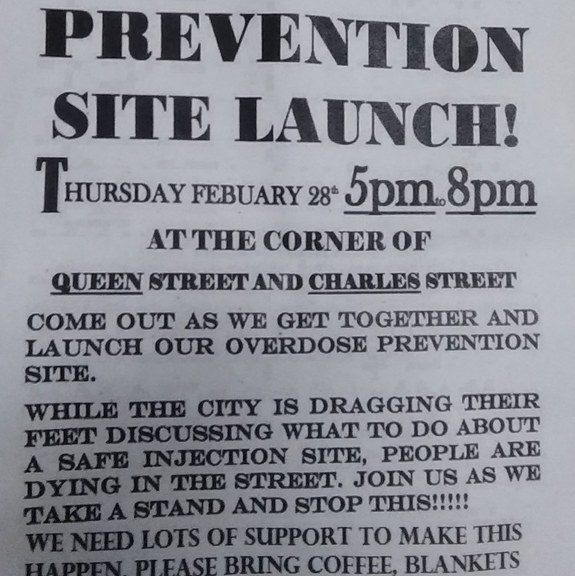 Focusing on the ongoing war on drugs and the resultant public health emergency, this episode opens with the trailer for the new podcast “Crackdown” from Vancouver based host and producer Garth Mullins which features “Drug user activists covering the drug war as war correspondents”. This monthly podcast is “about drugs, drug policy and the drug war led by drug user activists and supported by research”.

Shifting from the west coast to Waterloo region, the show continues with an interview with Kyle Wall and Julian Ichim, 2 organisers of a pop-up overdose prevention site campaign in Kitchener-Waterloo. This new campaign is has two main goals. The first is to prevent deaths of drug users by creating a place where they may more safely consume drugs. Many of the deaths triggered by fentanyl and other opioids would be avoided if the drugs were taken in a setting where someone else was present to administer naloxone and emergency breathing if needed. The second goal is to put pressure on the government in the Region Waterloo to take action to open the much needed supervised injection and consumption sites that have faced long delays in their approval and funding.

On February 28th 2019 at 5pm, members of the “Alan Ryan People’s Community Defense Brigade” organised a gathering in downtown Kitchener and marched to the Region of Waterloo headquarters to set up the first pop-up overdose prevention site in a new campaign to prevent deaths of people who use drugs, and to put pressure on the regional council who have been dragging their feet on establishing much-needed supervised consumption and injection sites.

At least 10 people died in the region in January alone from opioid overdoses, with February death toll similarly high, with at least 2 additional deaths in the final days of the month.

The group set up a tent and stocked it with necessary supplies, like clean needles, water, blankets, disposal bins, and most importantly, naloxone kits, which when administered to someone experiencing opioid induced respiratory depression, can help stabilise their breathing.  After several hours, the group packed up for the eve, announcing that they will be setting up this operation daily in different spots around the downtown until official supervised sites are established.

Today we are joined by organisers Julian Ichim and Kyle Wall To talk about the grassroots overdose prevention site campaign and the larger public health emergency brought forward by the manufactured opioid crisis.

The show closes with the song “Mutiny in Heaven” by The Birthday Party.

For more AW@L radio, including many past shows, check out http://grandrivermc.ca