Sam Nabi wasn’t available today, so we pre-recorded his interview on 3 July 2019. But through the miracle of recorded sound, it’s as though he was right in the studio!

Where is the Gaukel Greenway? 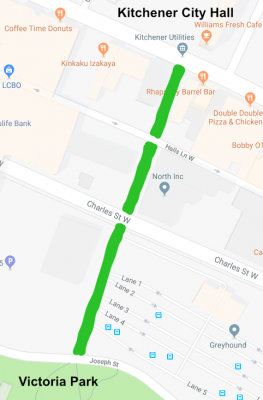 Closing Gaukel St. hasn’t really affected downtown traffic as far as I can see. How great would it be to turn the entire street into a pedestrian promenade? It would link the park, the Victoria Park ION station, and City Hall. pic.twitter.com/L2DnbjvUU9

Thanks to the staff that helped us draft this vision, and to @debbiechapman1 and @berryonline for attending our meetings and getting this motion to a vote.

It’s thrilling to see a grassroots proposal like this supported UNANIMOUSLY as the city affirms its strategic priorities.

CKMS Community Connections airs on CKMS-FM 102.7 every Monday from 10:00am to Noon.

Show notes and podcast interview content is Copyright © 2019 by the participants, and released under a