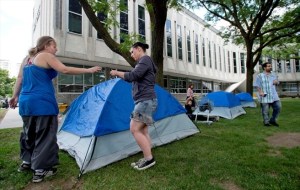 This show will examine the impact of the corona virus on homeless people and drug users. This show will be the first of three shows examining this problem from different perspectives.

Today’s show we will talk to two street activists about the impact the corona virus has on poor people and drug users.

Ivan Stoicovic is a local organizer who has been organizing for more than 30 years in Kitchener, Toronto, and Kingston. His activism ranges from Tent Cities, to stopping the war in Yugoslavia in 1998 and he has been very vocal on the issues of poverty and homelessness working with groups ranging from OCAP, KCAP, Kitchener Tent city Coordinating committee and other anti poverty organizations to anti imperialist groups such as the Kitchener Canada Cuba Friendship organization to the Hugo Chavez Peoples Defense Brigade.

Following Ivan, we will hear from Jonathan Stone who has helped organize the last three tent cities in Kitchener and is also a member of the Revolutionary student Movement.

In both of these interviews the impact of the corona virus on poor people and drug users is discussed from the perspective of organisers impacted people.

My next episode will share some experiences and perspectives from health care workers, and in the third part of this miniseries we will hear from drug users.