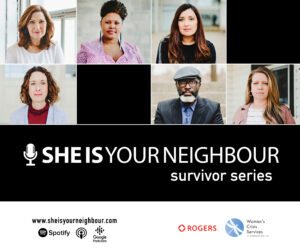 She Is Your Neighbour Survivor Series on Monday, 16 May 2022.

Visit sheisyourneighbour.com to listen to the first episode now!

In this series, you’ll hear from survivors who share unique experiences & how they’ve moved from surviving to thriving. @WomensCrisisSWR explores the realities and complexities of domestic violence by sharing real, raw stories from people of all walks of life.

New episodes will be released every week every Tuesday. The trailer and the first episode is out now!

CKMS-FM is airing Season Two of She Is Your Neighbour every other Wednesday from Noon to 1pm; Season Three begins 29 June 2022.

Have a listen and share your thoughts! Tag Women’s Crisis Services on social media and use the hashtags #SheIsYourNeighbour and #SIYNpodcast.

She Is Your Neighbour was launched in the form of a blog series and social media campaign. Women’s Crisis Services of Waterloo Region (WSCWR) asked community leaders to share their perspectives on domestic violence and explain why they are invested in ending it. These community leaders became ambassadors of the She Is Your Neighbour project. Together, WCSWR and these leaders explored different types of abuse and challenged the misconception that domestic violence refers only to physical violence. Many ambassadors shared stories of emotional, psychological, and financial violence that they have witnessed or experienced.

In fall 2020, the She Is Your Neighbour podcast was released! In the podcast, WCSWR takes a deep dive into domestic violence. Through thought-provoking discussions WCSWR addresses hard topics like domestic violence and the drug trade, violence against Indigenous women and girls, challenges for transgender youth seeking support, and more.

Season Two was produced in 2021. Throughout this season, we build on topics we explored in Season One and fill in the blanks by covering new topic areas. Join us as we explore the realities and complexities of domestic violence.

Our goal is to increase awareness and understanding of domestic violence through thought-provoking discussions, highlighting groups who are disproportionately impacted. We all have a role to play in ending domestic violence.

She Is Your Neighbour is hosted by Jenna Mayne.

She Is Your Neighbour is not currently on the CKMS-FM schedule.

WCSWR encourages you to get involved! Read a blog story, tune into the podcast, buy a book, start conversations, and use the hashtag #SheIsYourNeighbour. We can’t do this without you! We all have a role to play in ending domestic violence.

What is Domestic Violence?

There are many forms of domestic violence, all of which include attempts to maintain power and control over the thoughts, beliefs and behaviour of a woman by creating fear and/or dependency. All forms of abuse result in the woman feeling powerless, unequal and unsafe.

Domestic abuse includes but is not limited to:

Signs of domestic abuse include but are not limited to:

We all have a role to play in ending domestic violence

Jen Hutton, the CEO of Women's Crisis Services of Waterloo Region talks to Bob Jonkman about the services offered, the process of getting support, and the podcast She Is Your Neighbour.

The interview starts at 4m45s.